The political alliances among the cantons and a good national network now represent valuable resources, which must be carefully maintained and sustained. The presence of the Canton of Basel-Stadt in national exhibitions or in joint marketing platforms with other cantons leads to a greater awareness of the Canton of Basel-Stadt and Northwestern Switzerland within the rest of Switzerland. The three cantons of Basel-Stadt, Basel-Landschaft and Jura have, in recent years, used nationally known public trade fairs as an advertising platform to present themselves together as the region of Northwestern Switzerland. 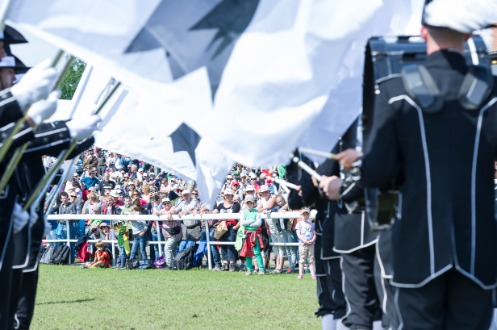 Performance of the Top Secret Drum Corps at the Marché-Concours 2014 in Saignelégier.

Appearances at the Marché Concours, Comptoir Suisse and Olma

In 2015, the Canton of Basel-Stadt organised a joint presentation with the Kanton Basel-Landschaft at the Swiss regional product competition in Delémont.

In 2014, Canton Basel-Stadt appeared as guest of honour at the national horse riding Marché-Concours in Saignelégier.

The three cantons of Basel-Stadt, Basel-Landschaft and Jura presented themselves together at the public trade fair of Comptoir Suisse in Lausanne, in 2013, as a single region under the heading of «c'est le (can) ton qui fait la musique».
Read more

The three cantons appeared at the Olma in St. Gallen as a single region in 2010 under the heading of «The Northwest. Open Switzerland» and used the opportunity to present themselves to a large Swiss audience as a culturally and economically diverse part of the country, as a place for education and research and as an area of full of contrasts in its urban and natural landscape.