History of the partnership

The following is a chronological list of the most important meetings and activities that have taken place to date within the context of the State Partnership between Basel-Stadt and Massachusetts.

At the occasion of the student exchange programme State Councillor Conradin Cramer welcomed students from the State of Massachusetts and Basel as well as the permanent representative of the United States Embassy in Switzerland to Basel Town Hall. The stay of students from the Boston in Basel is part of a student exchange programme run by the Gymnasium Leonhard and the Wirtschaftsgymnasium Basel.

At the occasion of the student exchange programme State Councillor Conradin Cramer and US ambassador Edward McMullen welcomed the students from the vicinity of Boston at Basel Town Hall. The visitors from the High Schools of Natick and Wakefield stayed in Basel for two weeks, after having themselves hosted students from Basel last october. On the part of Basel the Wirtschaftsgymnasium and the Gymnasium Leonhard are involved in this exchange programme.

Around 30 exchange students from high schools in Natick and Reading in the US Federal State of Massachusetts were welcomed by Ulrich Maier, the Head of Secondary School Education and Vocational Training, at Basel Town Hall. In his address, Ulrich Maier said he was delighted that every year young people have the opportunity to get to know a different culture and language and to conduct an exchange programme across the Atlantic as a result of the sister-state agreement between Basel and Massachusetts.

Around 30 students from the Wakefield Memorial High School and the Natick High School in Massachusetts attended a reception hosted by State Councillor Lukas Engelberger and the deputy headmistress of Gymnasium Leonhard as well as the deputy headmaster of the Wirtschaftsgymnasium Stefan Binkert and students from both grammar schools. Following an unique and impressive tour led by the former head of the immersion programme, Oswald Inglin, the exchange students were invited to the Great Council Chamber. In his speech, referring to his own experience, State Councillor Engelberger praised the education system in Basel and asked his guests to return to the city in the future if they got the chance, “perhaps to launch a career and benefit from our high standard of living”.

The Canton of Basel-Stadt organised a marketing event in Washington D.C. and Boston from 6 to 9 October 2015. The occasion was provided by an exhibition of two private collections from Basel in the renowned Phillips Collection in Washington D.C. and the 15th anniversary of swissnex Boston. As part of the swissnex anniversary celebrations, the Canton of Basel-Stadt and the State of Massachusetts resolved to step up their long-standing partnership. The appearances in Boston and Washington confirmed Basel’s standing as an international centre of art and culture and its status as an innovative research centre.

On 9 October 2015, on the occasion of Basel’s marketing presence, the Governor of Massachusetts, Charlie Baker, and Basel State Councillor Baschi Dürr met to discuss the Sister-state Agreement between the Commonwealth of Massachusetts and the Canton of Basel-Stadt as well as further cooperation in the context of their partnership.

View enlarged image
Vice-President of the Government, Eva Herzog, welcomed the group of pupils from Massachusetts at Basel City Hall.

Around 30 pupils from the US state of Massachusetts visited Basel as part of a school exchange programme. They were greeted at Basel City Hall by Vice-President of the Government, Eva Herzog. Secondary schools Gymnasium Leonhard and Wirtschaftsgymnasium Basel have been involved in a lively exchange with high schools from the Boston region for 12 years. The Department of Presidential Affairs supports this intercultural project as part of the partnership between the Canton of Basel-Stadt and the US state of Massachusetts.
Herzog’s address demonstrated her belief that intercultural exchange is of great value to education. “During the school exchange, which came into being as a result of the Sister State Agreement between Basel and Massachusetts, young people have the opportunity to come into contact with another language and culture and to share experiences with people of the same age from a different continent.”

View enlarged image
The students were welcomed in the Grand Council Hall of the Basel Town Hall by State Chancellor Barbara Schüpbach-Guggenbühl.

Around 30 American students visited Basel as part of the successful student exchange programme. The students from the Reading and Natick high schools in the Boston area were welcomed in the Grand Council Hall of the Basel Town Hall by State Chancellor Barbara Schüpbach-Guggenbühl and Chargé d'Affairs Jeffrey Cellars of the U.S. Embassy in Bern, on the 28th of April. They stayed with their host families in Basel for two weeks whilst attending classes at the Gymnasium Leonhard and the Business High School in Basel.

Originally initiated by the "Friends of Massachusetts" association, the student exchange programme has become one of the partnership’s great successes. The exchange programme has proven to be not just academically very valuable, but also on a personal level, by bringing young people together, who often stay in touch long after the actual exchange has finished. 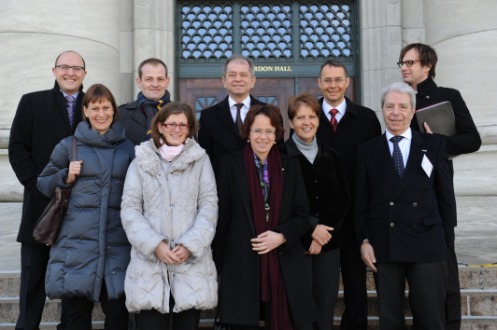 A visit by the Basel delegation to Boston, where the interests of science, industry and innovation came together.

A high-level Basel delegation from the areas of business, education and innovation visited the research-intensive environment of traditional science sites in Boston and Cambridge for four days. These are in the American state of Massachusetts, with which the Canton of Basel-Stadt has maintained an official partnership for eleven years now. The objective of this Agreement is the mutual exchange and mutual strengthening as internationally important research sites in particular in the field of life sciences.

The overlap between science, industry and innovation were at the heart of the visit in mid-February 2013. Contacts with institutions that focus on the transfer of the knowledge of these interfaces were intensified during theses four days.
The visit revolved around experiencing the personal encounter, but also the rich environment for the promotion of ideas. Therefore we visited not only the Swiss industrial company SOTAX headquartered in Allschwil and the Harvard Medical School, for example, but also the Cambridge Innovation Center (CIC) and the innovation laboratories of Harvard and the MIT. The CIC is specifically designed for start-up companies and offers office space with facilities, which correspond to the latest state of the art.

The i-lab at Harvard University and the media lab of the supporting business and innovation between the various universities bring together the interests of the student body outside the school. Both Prof. Dr. Antonio Loprieno, Rector of the University of Basel, and the State Councillor Dr. Eva Herzog were fascinated by the spirit of innovation and the ubiquitous optimism they encountered.

The outcome of this trip, along with the admiration for the enormous optimism in progress, remains the positive self-recognition that Basel need not shy away from its achievements as a location for both business and education.

The popular student exchange between Basel’s Commercial High School and the Leonard High School along with selected high schools in the State of Massachusetts took place again this year and was, as ever, very popular. American students from the high schools of Wakefield and Natick were warmly received in the Grand Council Hall of Basel-Stadt by the President of the Government Council of the Canton Basel-Stadt, Dr. Guy Morin, on the 24th of April and welcomed with an official speech. Both the representative of the American Embassy, Mr. Alexander Daniels, and also Dr Oswald Inglin and Stefan Binkert, the Deputy Head of the two Basel high schools, welcomed the students personally and wished them a memorable time during their two-week stay in the Swiss partner city.

For the eighth time, a selection of students from high schools in Wakefield, Gloucester and Natick in the US-American state of Massachusetts has taken part in the student exchange programme between the partner states. The Department of Presidential Affairs of Basel-Stadt supports this inter-cultural project within the framework of the Basel - Massachusetts State Partnership, and invited the guest students to an official reception in the City Hall. The welcoming address was given by Barbara Schüpbach-Guggenbühl, State Chancellor of the Canton of Basel-Stadt. Alex Daniels, the Press & Cultural Attaché of the US-American embassy in Bern, also had a few words for the exchange participants.

On the initiative of the Office for the Economy and Labour (AWA) of the Canton of Basel-Stadt, a delegation of business promotion organisations from North-Western Switzerland will be visiting Boston. The main focus will be on exchange of expertise and meetings of experts within the context of the events at Swissnex Boston.

As in every spring, guest students from Massachusetts will be received by representatives of the government of the Canton of Basel-Stadt. In the presence of a representative from the US Embassy, the students from Massachusetts, who are participating in a exchange programme of the Gymnasium Leonhard and the Wirtschaftsgymnasium, were received in the Parliament Hall (Grossratssaal) of the Basel Town Hall (Rathaus).
More about the student exchange.

View enlarged image
Dr. Guy Morin welcoming a group of students from Massachusetts in the Basel Town Hall in 2009.

As in every spring, guest students from Massachusetts will be received by representatives of the government of the Canton of Basel-Stadt. In the presence of a representative from the US Embassy, the students from Massachusetts, who are participating in a exchange programme of the Gymnasium Leonhard and the Wirtschaftsgymnasium, were received in the Parliament Hall (Grossratssaal) of the Basel Town Hall (Rathaus).
More about the student exchange.

As in the year before, group of students of economics at Boston College visit leading companies and institutes in Basel.

In a joint research project, scientists at the Biozentrum of Basel University, MIT and Massachusetts General Hospital have developed a new adhesive tape for doctors The tape has been inspired by the gecko. More.

The pharmaceutical company Novartis and the Massachusetts Institute of Technology (MIT) start a long-term research cooperation to develop new methods for the production of pharmaceuticals.

Scientists at the Biozentrum of Basel University and at MIT present a process by which medicinal products such as needles or catheters can be covered with a fungicidal surface.

An international team of researchers at the Swiss Nanoscience Institute of Basel University, MIT, Harvard University and Bell Labs succeeded in experimentally proving a promising quantum state in semiconductor nanostructures. These ground breaking experiments are an important step towards the development of a topological quantum calculator.

Students from Massachusetts visited Basel in 2007.

A group of students of economics at Boston College visit several companies and institutes in Basel.

Several representatives from Basel (politicians and economic leaders) participate in BIO 2007, the global fair for biotechnology.

Governor Deval L. Patrick, who was elected in November 2006, renews the Sister State Agreement between Massachusetts and Basel in a proclamation presented to the Basel Government by exchange students of Gloucester High School.

University Hospital Basel and Beth Israel Hospital in Boston start an exchange on «Effects of Rationing on Nursing Care».

The Department of Geosciences of Basel University initiates an exchange on civil engineering projects with MIT in Cambridge. The exchange is called «Urban Geosciences».

May 2002: NIBR Headquarter in Boston inaugurated

Novartis opens its global research headquarters at the Novartis Institutes for Biomedical Research in Cambridge.

November 3, 2000: The association «Friends of Massachusetts» is founded

The «Friends of Massachusetts» are founded as a private non-profit association. This association will lay the basis of the future partnership and initiate a number of projects.

May 22, 2000: Memorandum of Understanding is signed

Substitute Governor Jane Swift visits Basel on a trade mission. Along with president Ralph Lewin, she signs a Memorandum of Understanding, in which both states agree to extend their relationship. The Memorandum is the first step on the path to an institutionalized partnership.