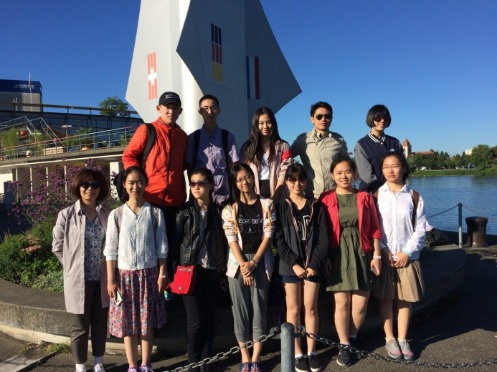 Gymnasium Leonhard began offering lessons in Chinese in 1991. Since then, Chinese has become firmly established as an optional subject for students attending the five public secondary schools in the canton.

In 2011, the twinning of Basel and Shanghai was extended to include a similar twinning between Gymnasium Leonhard and Fudan Fuzhong High School in Shanghai. Every two years, students from years 2 and 3 at the school travel to China for a two-week stay in the country. In the years when the Basel students are not in China, Chinese students normally visit Basel.

This exchange provides participants from both cities with an in-depth look at the culture of the other country and its educational system as they share the everyday life of the school. Some also stay with host families. And, of course, time is also found to visit the sights and places of interest in each of the cities.

Shanghai hosts the International Sister Cities Youth Camp in July of every year. Up to 200 young people from everywhere in the world – Shanghai is twinned with more than 60 cities – have the opportunity to get to know the city of Shanghai, its culture and its life as well as some Chinese phrases. Attendance at this event has been available for three to six students from the first and second levels of secondary schools in the Basel region every year since 2012. The External Affairs and Marketing Department and the Department of Education of the canton cooperate every March to review applications from young people interested in joining the event.

Reception for participants in the Basel Shanghai High Potentials Programs in Basel on 21 May 2019; put at disposal

An exchange programme for young managers has been organised by the University of Applied Sciences and Arts Northwestern Switzerland and the Shanghai Economic Management College from 2009/2010 onwards.

The first group of young managers from Shanghai visited Basel in 2009 followed by a visit in the opposite direction in 2010. These initial visits proved to be successful with the result that from 2011 onwards the programme, now organised by the FHNW School of Business and the Shanghai Economic Management College, has developed into a regular event.

University of Basel and the East China Normal University

The University of Basel (UNIBAS) and the East China Normal University in Shanghai (ECNU) have been cooperating at an academic level since 2013. Although the key feature of this cooperation is education and research, projects in which these two institutions act as intermediaries also form part of their joint work. The organisation of the exhibition “Usakos – Photographs Beyond Ruins” of the Centre for African Studies of UNIBAS at the ECNU in 2019 is an example of this cooperation, which also extends to an exchange of students.

The establishment of the “Confucius Institute at the University of Basel” by the two universities in 2013 marked a further milestone in the links between the two cities. The Institute was conceived as a platform for academic exchanges across a number of subjects as well as a way of providing language and further educational courses for teaching staff. However, through the organisation of a variety of lectures, exhibitions, workshops and concerts the Institute also gave new impetus to the cultural links between China and Switzerland in general, and between Shanghai and Basel in particular. Over the years the cooperation between UNIBAS and the ECNU has become well established in a range of fields and the intermediary function of the

Confucius Institute is no longer needed as a platform. The Institute was therefore closed at the end of September 2020.