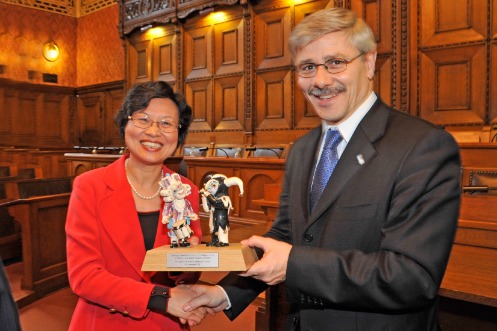 The city partnership has been in existence since 2007, and is being continually developed. The University Hospital Basel is an important partner to this endeavour. A number of scientific collaborations between doctors at the University Hospital Basel and various hospitals in Shanghai, the partnership agreement between the University Children’s Hospital of the Two Basels (UKBB) and the Shanghai Children’s Medical Centre, as well as well as the establishment of the summer schools in Basel and in Shanghai are testimony to the successful cooperation between the two cities in the health sector.

In January 2011, a health delegation from Shanghai to part in the opening of the new UKBB building and signed a Memorandum of Understanding between the University Children’s Hospital of the Two Basels and the Shanghai Children’s Medical Centre.

The Basel University Hospital cooperates closely with Medical Schools in the three largest universities in Shanghai - Fudan, Jiao Tong and Tongji – along with their various affiliated hospitals. Reciprocal working visits and scientific symposia have intensified cooperation on an ongoing basis since the start of the partnership. The mutual cooperation agreements, which were renewed in 2013, provide for the further development of cooperation, the exchange of talented doctors and young researchers as well as the development of joint research projects.

View enlarged image
The people of Basel benefit from the international cooperation, as this medical care and clinical research are ensured at a high level.

In the clinical field, doctors and scientists from both cities have been intensifying their collaboration, inter alia in the fields of stomach cancer, lung cancer and tumour markers, where the University Hospital Basel is cooperating with Tongji University Shanghai, or in the field of oral and maxillofacial surgery, where a corresponding cooperation has been established with Jiao Tong University Shanghai. Thanks to the larger catchment area resulting from the two cities, studies are able to draw upon a larger quantity of data. This demonstrably boosts the quality of the scientific research. The exchange and the resulting networks also offer an attractive platform when it comes to recruiting talented academics, both in Basel as well as in Shanghai.

Medical students in both cities experience the differences

View enlarged image
Doctors and scientists from both cities strengthen their cooperation in the clinical sector, in areas such as lung cancer and tumour markers or in oral, maxillo and facial surgery.

The city partnership enables numerous talented students, young researchers and doctors to engage in productive cultural and scientific exchanges.
The Medical Faculty of the University of Basel has created a programme which is specially tailored to the needs of the Shanghai students for a summer school in Basel. An initial exchange took place in the summer of 2010. This allowed several students from Shanghai to gain insights into the regular clinical and scientific activities pursued by the University Hospital over a period of three weeks. In addition, Basel and other parts of Switzerland were also intensively explored. This means the students have now returned to Shanghai with many fabulous and positive impressions of Switzerland. Following this success, students from Basel had been given the opportunity to attend a summer school in Shanghai. Meanwhile, the annual exchange between the University Hospital of Basel and the Medical Faculty of the University of Basel and the Medical Schools of the three Universities of Fudan, Jiao Tong and Tongij in Shanghai, has become firmly established in the agenda.

Following the various summer schools which have been successfully held in the last two years for students from both countries, the focus has now been moved to the exchange of doctors and researchers along with scientific cooperation. Periods of residence are planned on both sides in the form of fellowships of 6-12 months at hospitals and laboratories in Shanghai and Basel. These stays will serve first for advanced training, e.g. in order to learn specific techniques, and secondly in order to implement joint research projects.

The benefits for Basel and its population

Basel can only benefit from the many advantages of this cooperation when the University Hospital of Basel raises its profile to our partners in Shanghai as a reliable and internationally acclaimed partner. And that is exactly what it is doing: The famous Shanghai Jiao Tong World Ranking in the field of medicine ranks the University of Basel amongst the top 50. The Basel population will benefit from the international cooperation because it will help safeguard the provision of outstanding medical care and clinical research. In its capacity as a partner of Basel University, the University Hospital will also be able to establish key determinants for prosperity in many research fields within the life sciences sector.