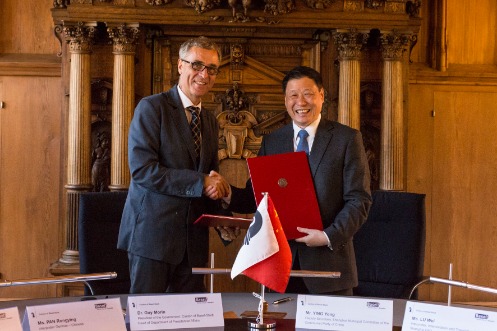 Former President of the Government of the Canton of Basel-Stadt, Guy Morin, and Deputy Secretary of the CPC Shanghai Committee, Ying Yong, signed the fourth consecutive MoU for 2017 to 2019 on September 2, 2016.
Foto: Cornelia Biotti

The city partnership of Basel and Shanghai is based on a partnership contract that was signed in Shanghai on the 19th November 2007. For a period of three years in each case, a Memorandum of Understanding (MoU) defines the more specific goals of the cooperation, which have been agreed in advance. The agreed goals will thereby be implemented by both partners as far as possible, although the activities that are actually carried out are not exclusively limited to the contents of the MoU.

Basel and Shanghai reaffirm their partnership for 2017 to 2019

In 2017, Basel will already be able to look back on a decade of cooperation with its sister city, Shanghai. Since the partnership agreement was signed in 2007, the objectives and main foci of the cooperation have been set down for each three-year period in a Memorandum of Understanding (MoU). On September 2, 2016, former President of the Government of the Canton of Basel-Stadt, Guy Morin, and Deputy Secretary of the CPC Shanghai Committee, Ying Yong, signed the fourth consecutive MoU for 2017 to 2019 in the presence of State Councillor Lukas Engelberger.

Morin explains the importance of signing the agreement: “the partnership has resulted in many projects that have created added value for Basel, as well as for Shanghai, such as collaborations between the University of Basel and the University of Applied Sciences and Arts Northwestern Switzerland with partner universities in Shanghai, an exchange program for executives or cooperation in the field of healthcare”. A total of 23 matters involving 20 institutes from Basel and Shanghai were fully translated into action from 2014 to 2016. 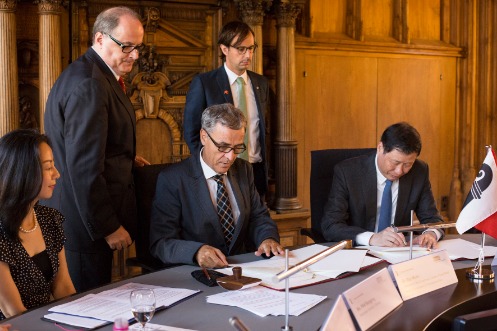 The MoU reinforces existing cooperation in the areas of economy, life sciences and healthcare, education and science, location marketing, culture and society, as well as exchanges at local-authority level. In the field of life sciences and healthcare, existing collaborations regarding services and research are set to continue between the Faculty of Medicine of the University of Basel, University Hospital Basel and University Children’s Hospital Basel and medical schools at the universities of Fudan, Jiao Tong and Tongji, as well as their affiliated hospitals.

The Confucius Institute at the University of Basel is still a focal point of the sister-city arrangement when it comes to education and science. Existing collaborations between the University of Basel and the East China Normal University, as well as the University of Applied Sciences and Arts Northwestern Switzerland (FHNW) with the relevant partner universities are also set to continue. An exchange program for executives run by FHNW with the Shanghai Economic Management College (SEMC) will be maintained. The existing cooperation projects organized by the Department of Education of the Canton of Basel-Stadt will also be continued.

In matters of the economy, Basel Congress Center will be included as a focal point in the MoU, along with EuroAirport, Port of Switzerland and BaselArea. The aim is to intensify cooperation in the sphere of conferences. Furthermore, existing collaborations involving the University of Basel should, where possible, be extended to other Shanghai universities. In addition to the existing partner districts of Xuhui and Jing’An, the exchange at local-authority level should be extended to include the district of Huangpu. The aim is to support creation of a center where young people in Basel can experience Chinese culture.

The wishes and interests of stakeholders are welcomed, and will be integrated into the next MoU wherever possible. Do not hesitate to contact Josias Planta, Head International Cooperations, Tel. 061 267 40 86, josias.planta@bs.ch.