The tri-national cooperation is a very important work environment for the Canton of Basel-Stadt due to its location on the border triangle with Germany and France. 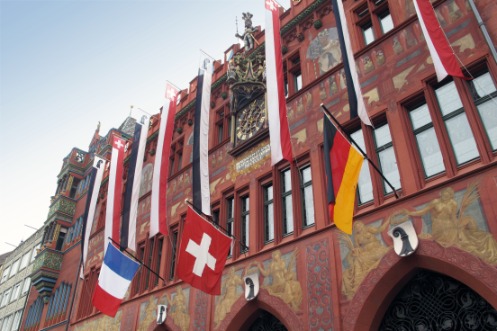 The government of the Canton of Basel-Stadt has always worked towards ensuring that the metropolitan area of Basel grows together as an integrtaive living environment and economic area and that existing border barriers are broken down. It reaffirmed this approach most recently in its legislative programme for 2013-2017. One of the most important resulting actions to be taken from this is an improved alignment of the various bodies and organisations in the area of cross-border cooperation and to coordinate their contents. The tri-national cooperation can be essentially divided into two areas of cooperation:

Cooperation in the Upper Rhine

The cooperation area in the Upper Rhine region comprises the five Swiss cantons of Basel-Stadt, Basel-Landschaft, Aargau, Solothurn and Jura, parts of the federal states of Baden-Württemberg and Rhineland-Palatinate and the Departments of Haut-Rhin and Bas-Rhin of the Grand Est region. The various cooperation bodies in the Upper Rhine area have joined forces under the umbrella of the Tri-National Metropolitan Region of the Upper Rhine Valley (TMO) to represent the region as a unified entity. Since 1990, over 400 cross-border projects, including approximately 200 projects involving Swiss organisations, have been implemented under the Upper Rhine INTERREG programme which receives funding from Europe.

Cooperation in the agglomeration area

View enlarged image
Since December 2014 the tram line 8 has travelled across the border to Weil am Rhein (Germany) and the tram line 3, since december 2017, to Saint-Louis.
Photo: Philipp Kneubühler

The Tri-national Euro District Basel (TEB) was founded in 2007 to promote cooperation in the Basel agglomeration. It is the driving force behind tri-national projects revolving around various issues. Relevant examples include the IBA Basel 2020, which focuses on bringing new architectural visions to the region as well as numerous projects in the fields of public transport and encounters between citizens.

More information about the Tri-national cooperation