The information and counselling centre INFOBEST PALMRAIN informs and advises citizens, administrations, companies and associations in all cross-border issues between Germany, France and Switzerland. 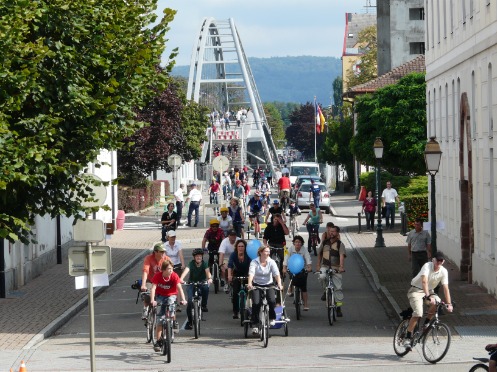 INFOBEST PALMRAIN has its headquarters in the heart of the border triangle.

About half of the annual 7,000 enquiries concern the area of cross-border work with questions relating to the labour law, social security, taxes, pensions, etc. Other more frequently asked questions concern vehicle registrations, moving to a neighbouring country or residence permits. The employees at INFOBEST inform and advise, but also relay the contact details for the proper addministrative authorities. INFOBEST PALMRAIN is therefore an important link between the people and the authorities of these three countries.

Founded on 6 June 1993, INFOBEST PALMRAIN was initially an Interreg project. INFOBEST PALMRAIN was therefore financed with funds from the European Union. This part was taken over by numerous co-financiers at the local level in 1998. Local and regional authorities in the three countries of Germany, France and Switzerland now share the funding equally. On the Swiss side, INFOBEST is funded by the cantons of Basel-Stadt and Basel-Landschaft as well as further local and regional partners.