The Tri-national Eurodistrict Basel (TEB) is the central cooperation body in the agglomeration of Basel. It was established as an association on the 27th of January 2007. 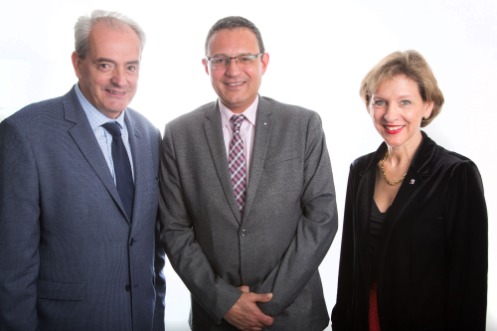 The executive committee of the Tri-national Eurodistrict Basel is composed of one member each from the German, French and Swiss delegation. Currently, it includes Jean-Marc Deichtmann (F), Mike Keller (CH) and Marion Dammann (D) (from left to right).

Although the tri-national Upper Rhine region is divided by political borders, it is increasingly becoming a unified, closely interlinked territory. Around 60,000 commuters in the agglomeration area cross the borders every day, large companies are setting up branches abroad in border-zone areas, and the population takes advantage of shopping and restaurant facilities in all three countries. This development requires greater cooperation between the local authorities and administrative districts of all three countries, which is why the Trinationale Eurodistrict Basel (TEB) was established in 2007 as a platform for discussing cross-border issues and developing appropriate projects. The region encompasses the cantons of Basel-Stadt and Basel-Landschaft, Fricktal and the administrative districts of Thierstein and Dorneck in Switzerland, the district of Lörrach and the cities of Wehr and Bad Säckingen in Germany and the recently merged St. Louis agglomeration in France. TEB thus works on behalf of around 850,000 inhabitants.

The association has 80 active members who participate in the annual general assembly and determine the overall direction of the TEB. Eurodistrict is actually led by an executive committee with nine members provided by each of the three countries. Switzerland is represented by four members of the governments of the cantons of Basel-Stadt, Basel-Landschaft and Aargau, as well as local authority presidents from Riehen, Allschwil, Binningen, Rheinfelden and Dornach. The three nations take turns to hold the chair for two years at a time according to a specific, regular cycle. From June 2019 to spring 2021, the chair is held by the German delegation in the person of Landrätin Marion Dammann. The third committee is the district council with 20 Swiss, 15 French and 15 German members who all hold a political office. The district council can put forward motions but has a purely advisory function. TEB does not have any political powers, but is an organisation constituted under French law. Nevertheless, the organisation works to exert the greatest possible influence via its members. The chair is currently held by Heinrich Ueberwasser, member of the Great Council of the Canton of Basel-Stadt.

Among the activities pursued by the TEB are the development of the harbour area between Huningue, Weil am Rhein and Basel-Stadt in the context of the 3Land project, support of tri-national public transport tariff cooperation under the triregio.info brand and the establishment of a tri-national information platform for mobility services. The IBA Basel 2020 exhibition also forms a key focal point and provides new impetus for city development and building culture in general. The TEB also promotes cross-border encounters by donating up to EUR 40’000 to small-scale Projects.